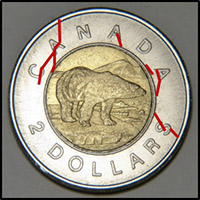 This is a multi-segment die crack with as many as seven distinct fractures, all of which are in the ring. Working clockwise from the C of CANADA, the first segment crosses the bottom portion of the C and terminates at the second segment at the A. The next segment starts at the core-ring boundary just below the C of CANADA and curves upward toward the left leg of the A. It then moves inside of the A to the right side where it then curves upward again to the edge of the coin. Next is the second A of CANADA with a short crack extending down the right leg toward the core. At the third A of CANADA is two short cracks, the first below the left leg and the second moving from the left leg to the right and then down toward the core. Lastly, at the S of DOLLARS are two more short cracks, the first extending from the upper right at the core through 2/3 of the S, and the second going from the lower right of the S to the rim of the coin.

This is a progressive die crack and is found in two varieties:

DISCLAIMER: This website is designed solely for educational and reference purposes. The collecting of counterfeit coins or currency is illegal and explicitly not condoned by this website.