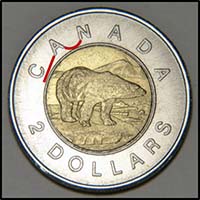 Reverse Die Crack A is one of the two most commonly found reverse die cracks.

DISCLAIMER: This website is designed solely for educational and reference purposes. The collecting of counterfeit coins or currency is illegal and explicitly not condoned by this website.